Area 6’s Unified Basketball Team had an incredible tournament on March 7, 2020 in Stafford, VA at the SOVA State Basketball Championship. There were great, competitive games. Area 6 won their first game 19 – 16 against an Area 9, Blacksburg team. Their second game was against a new team from Wakefield HS in Arlington. It was a fast paced, competitive game from the start. Wakefield has a star athlete who is aggressive and can take over the game.

The Area 6 team did a great job playing together and finding the open player for a shot. Everyone, except Faith, scored and Mason was our high scorer with 8 – 10 points. (CJ did not come this weekend due to a stomach virus.) The game was tied with 10 seconds remaining. The other team’s star player got the ball and made a terrific 3-point shot to win the game 39 – 36. Wakefield came in 3rd place because it was a three-team division and every team won a game. I already knew that if we scored 17 points we would come in 1st place even if we lost to Wakefield.

Rick Jeffrey, the SOVA President said it was one of the best Unified games he has ever seen. Everyone played to their ability level and almost everyone contributed to the game. It was a great game and so fun to see how much the Area 6 team improved over the course of the season. The three local tournaments and three practices with a gym to themselves the last four weeks certainly helped the team be prepared for the Championship. 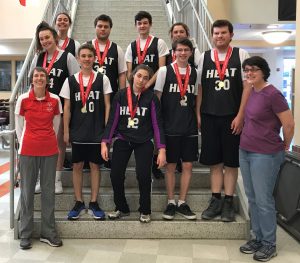